My second year with Volunteer Maryland started a lot differently than my first year.  Rather than being intimidated and unsure, I was excited for my second year.  I was going to be working with people who inspired me to push harder and go farther than I would have if I hadn’t worked with them, and I was going to be working with two friends I had made during my first year with Volunteer Maryland.  I thought that I had a good idea about what I would be doing over the course of my second year.  It turns out that I had no idea what my job was actually going to involve.  Even now, almost half-way through my year, I’m amazed by how dynamic my job is. 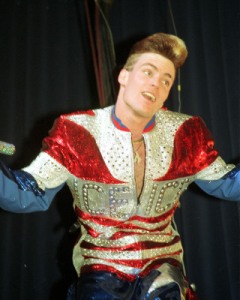 It’s not that my job doesn’t have any structure, far from it in fact.  A lot of the dynamics come from the nature of my position.  I’m part of a team of AmeriCorps members who are out in the field.  For them, I’m a quartermaster – I get to make sure the Volunteer Maryland Coordinators have all of the resources and tools that they’ll need to do their jobs.  I’m a mechanic – helping to fix things when they break and greasing a lot of wheels.  I’m Vanilla Ice – if you’ve got a problem, yo, I’ll solve it.  I’m an intelligence agent – spending time finding out things that the Volunteer Maryland Coordinators and Volunteer Maryland staff need to know in order to be able to better do their jobs.  Overall, I’m the guy behind the guy behind the guy that works behind the scenes to make things run smoothly.

I’m part of the Volunteer Maryland support team.  I plan meetings for some of Volunteer Maryland’s AmeriCorps members so they can get together outside of the regular training days – I’m working on planning a service project for the members in my region now.  I go on site visits with Volunteer Maryland staff to make sure that our members and sites are working well together.  I’m involved in training days for our members, and sometimes people even remember what I say, which makes me feel good about the time that I put into preparing to speak in front of people.  We’re ramping up our recruitment and outreach right now, and I’m going to be involved in that, too.

I’m also allowed to design my own projects, so I’m part of a team of people who are trying to show Baltimore nonprofits some low-cost ways of sharing information and communicating with the people they serve.  If I’m lucky, the project will expand to the state of Maryland, and if I’m really lucky, I’ll be able to go to New York at the end of June to talk to nonprofit leaders from across the nation about how I, and a group of pretty amazing people, did it.

I’ve never really understood why people use the phrase, “I’m just a cog in a machine,” in a negative way.  Have you ever taken a cog out of a machine and had it still work like it ought to?  That piece that’s “just” a cog is fairly important, otherwise it wouldn’t be there.  It’s part of being on a team – you and those other cogs need to work together or else things wouldn’t happen.

5 thoughts on “Collaborating and Listening is Also Part of My Job.”